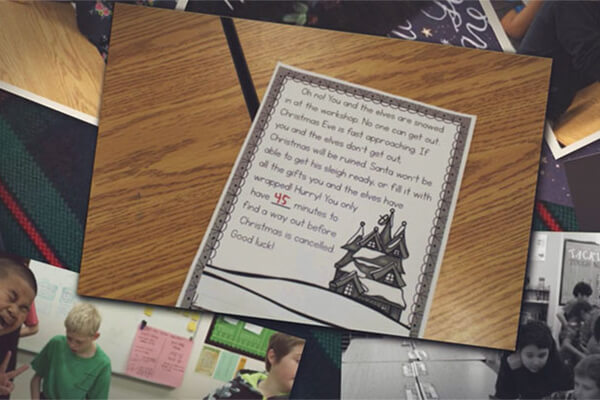 Last Friday we attended a 5th grade class participating in a Breakout EDU activity at Timpanogos Elementary. The Breakout EDU games all require critical thinking, collaboration, creativity and communication. Each box has hundreds of games to play and 16 subject packs that contain games from topics like math, science, history, modern language, library, team building and others! The class listened to their teacher as she explained to the students the problem they were faced with. As Santa’s workshop helpers who were snowed in, the students’ objective was to find a way out as fast as possible to help Santa fill his sleigh with toys before Christmas was cancelled!

The winning team of Santa’s helpers were able to “breakout” from being snowed in with four minutes left to spare! After detaching every lock on the box, the students found their small prize of chocolate chip cookies. This is the second Breakout EDU activity the 5th grade class has accomplished! The first activity involved devising the perfect model that would support and protect an egg once it was thrown off the school roof. We cannot wait to see how the next one goes!! Thanks for letting us be apart of your fun day!