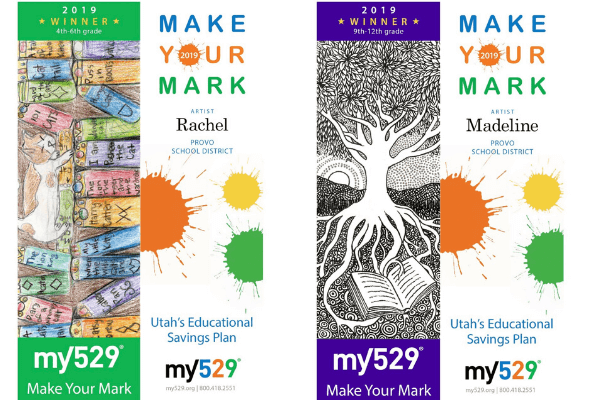 Two Provo School District students each won a $1,000 college scholarship for their artwork in my529 and UtahFutures’ Make Your Mark bookmark contest. More than 1,800 students in four age categories entered original designs for a chance at a $1,000 my529 college savings scholarship account.

Rachel Jensen, a fifth-grader at Canyon Crest Elementary, and Madeline Hoyt, a Timpview High School sophomore, were honored with other winners at an awards luncheon Friday, November 22, at Zions Bank headquarters in Salt Lake City. Rachel’s bookmark depicted a calico cat snoozing on a bookshelf, surrounded by a bunch of “famous” feline literature, such as “Harry Catter,” “Catter Pan,” “Catsy Drew” and “Lord of the Cats.”

“There’s this cat next door. It’s a calico. It’s so nice to me. I decided to draw a bookmark around it and then renamed some of the classic books,” said Rachel, who also has a cat of her own.

“I love art in general. I like P.E., and I’m pretty good at math,” Rachel said of her academic interests. She’s also a ski racer, competing in her third year of ski team at Sundance.

College for Rachel is an expectation.

“My husband is a college professor in the philosophy department at BYU, so we all expect that she’ll go,” said her mom, Ashley Jensen.

In the future, Rachel would like to be an architect and design houses—helpful, too, that mom is a realtor, “so she’s in houses a lot,” Ashley Jensen said.

Winner Madeline Hoyt also has hopes to become an architect or possibly a graphic designer.

Explaining her inspiration for her bookmark, Madeline said, “I really liked the idea of a tree reading a book. I see trees as possessing such knowledge and wisdom because of the rings.”

To view the other winning works of art, visit my 529.org