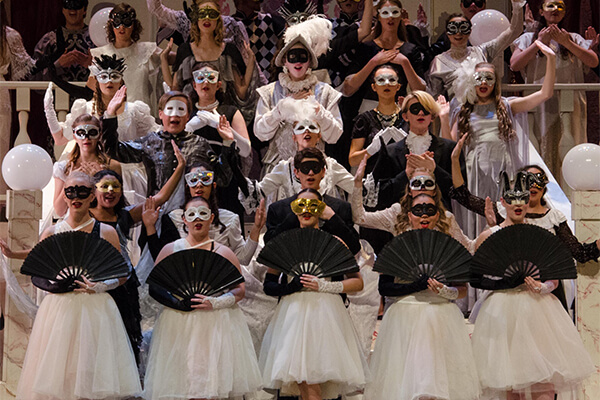 Provo High School’s current production, The Phantom of the Opera, marks the grand finale of musicals on Provo High’s current stage for the past 61 years. The Provo High Drama Department invites all PHS DRAMA Alumni to come and enjoy a special Alumni Gala Performance of The Phantom of the Opera on Friday, November 17, 2017. PHS drama alumni include anyone who took a drama class, performed or teched a show, was in a drama club, directed shows, designed sets, helped with costumes or lights, etc.

“All that we are able to accomplish now in the Provo High School Drama Department is due in part to those who have gone before–all the teachers and students and families who have been associated with PHS Drama for over a century! We stand upon their shoulders, and together we are all a part of this great legacy and this final grand musical event. This is why we want to dedicate this performance to our alumni,” states the current Provo High Drama. “We honor the dedication and sacrifice of all those who have participated in PHS Drama for the past century. We are grateful for the legacy of creativity and excellence in the Dramatic Arts and we strive to carry on that legacy of excellence today.”

Provo High DRAMA alumni/teachers/directors/ technicians who attend this performance and can give the year and circumstances of their participation in drama as a PHS student/staff can receive a $2 discount for tickets at the door. In keeping with a musical number from The Phantom of the Opera, “Masquerade,” Drama alumni and all other audience members on this night are invited to attend in masquerade costumes if desired–certainly not required!

There will be PHS yearbooks dating back to 1921 on display and guest books available to sign in. A group photo will be taken on stage after the performance.

All community members are invited to attend as well. Please join us for this historic event to help celebrate the great legacy of dramatic performances at Provo High.

Tickets are available online at provohigh.provo.edu –scroll through the banner at the top of the website and click on the link to PHS Drama/Phantom of the Opera.