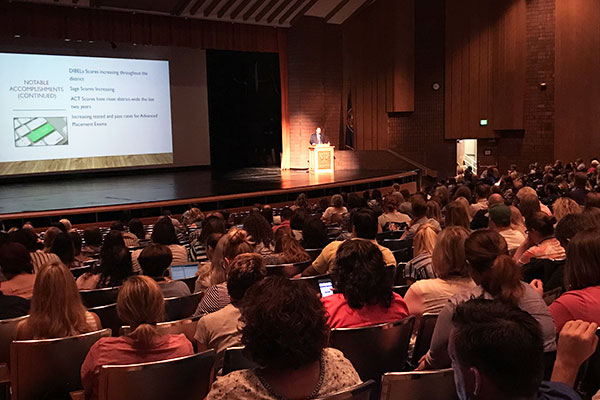 Last Friday, teachers and faculty members gathered at Timpview High to celebrate the start of a new school year.

At this year’s annual District Kick-Off meeting, Superintendent Keith Rittel began by noting all of the district’s outstanding 2017-2018 school year accomplishments. These included the following:

Following the celebration of these accomplishments, Superintendent Rittel discussed upcoming changes and events for this coming 2018-2019 school year. Following which, Keira Scholz, the guest speaker for the presentation, was introduced and spoke to the audience on how the teachers in Provo City School District positively impacted her life.

Keira helped set the stage for the introduction of the 2018-2019 District theme, which is “Why I Teach”. A video introducing the theme was played and the Superintendent stated, “I’m sure each of you have your own story about why you love to teach”. The audience was then released to gather in their individual grade level/specific subject groups for further training

All in all, this was a great meeting that helped to kick-off what is sure to be another great year for Provo City School District.