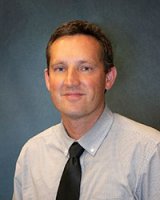 Clay Bingham has been named as the new CTE Director for Provo City School District.  He has been an assistant principal at Timpview High School and replaces outgoing CTE Director Lyndsay Huntsman, who accepted a position with another school district. Clay Bingham has worked for Provo City School District for over nearly 14 years. He started his career teaching Spanish and Drivers Education at Timpview High School. He later became the assistant principal there and worked in that position for the last 6 years. He has worked in many different capacities as an administrator, supervising CTE, athletics, AVID and safety to name a few. Clay was recently awarded “The Outstanding Administrator of the Year” for the Provo City School District. He was also a finalist this year for the Assistant Principal of the Year from the state’s UASSP organization. Clay enjoys spending time with his wife, Kristy, and their four kids. He loves to golf, hunt, play sports and coach his kids in whatever activity they are doing.

Suzanne Parker has been appointed to act as a new Assistant Principal at Timpview High School beginning July 1.  Previously, Suzanne worked as the Dean of Students at Timpview where she oversaw their literacy initiative, new hire supports, instructional coaching, professional development, and data analysis.  After teaching English for 20 years and earning endorsements in Reading and English Language Learning along the way, Suzanne became a district instructional coach for Provo City School District. During her two year tenure as an instructional coach, she supported new hires in the secondary schools, taught district-wide professional development, and facilitated the District Literacy Committee (secondary).  Suzanne earned both her B.A. in English Teaching and M.Ed. in Educational Leadership from BYU. She is the proud mother of two adult children.