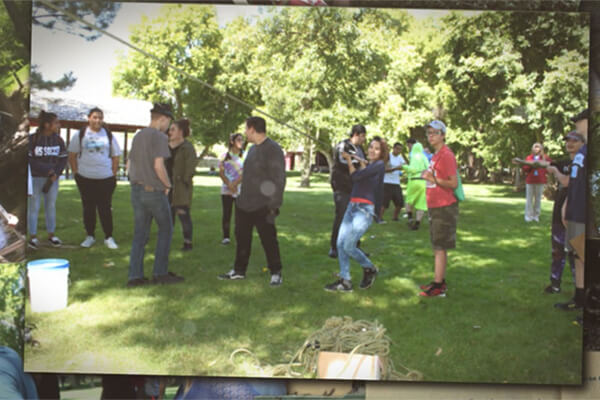 The mission of Army Junior ROTC is to “motivate young people to be better citizens,” stated Colonel David Miller, and that is exactly what he does. Colonel Miller is a teacher at Independence High School and leader of the Junior Reserve Officer’s Training Corps (JROTC). He has 25 years of Army experience and uses that knowledge to help students develop lifelong skills and values.

The Army values include loyalty, duty, respect, selfless service, honor, integrity and personal courage. Students strive to obtain these values through a variety of exercises during class. On September 18, 2017, the Colonel’s class participated in a ropes bridge course. The Colonel believes developing skills will prepare students for future challenges. Therefore, the students began with the basics and learned how a rope was constructed. They then proceeded to tie knots and learn other advanced techniques. By the time the students faced the rope bridge course, they were well prepared for the challenge.

In the exercise, a rope was tied between two trees over a river. Students then connected their harness to the rope and crossed over the river, hand over hand. For some students, it was easy. For others it was more difficult. However, the learning outcome was the same. In the end, every student was cheered on as they climbed across the rope and every single person crossed the river successfully.

The JROTC program helps students learn about themselves and how they can become efficient leaders and communicate well. “I constantly stress that we’re not the product of our birth or genetics or environment; we’re the product of our choices.” Colonel Miller explained.

The Colonel also mentioned that he tries to “motivate [students] to be good citizens by getting to know them individually and letting them get to know him.” His students enjoy overcoming obstacles and learning how to work as a team. Although recruitment is not a primary objective, six to eight students decide to join the military at the end of each year. “I try to help them understand what a serious commitment it is to take that oath,” stated Colonel Miller.

We are grateful for the values and lessons being taught to our students. JROTC is an influential program that builds more than just bridges; it builds lifelong skills.